In 1988 Mr Lal went back to India for a holiday for the first time in over 30 years. He went on a train journey to visit his Sister’s hometown in Bihar. During his time there he visited a leprosy colony where he made a donation for the leprosy victim’s homes. One of the sufferers started talking to him in English. He told Mr Lal while he had been studying to become a doctor he had contracted leprosy and had to stop his training. This man explained that they were the lucky ones as they regularly received donations and support. He stated that if he really wanted to help in a meaningful way, he should go to Ranchi as they were in urgent need of help. At that time Ranchi was the capital of Bihar. On his journey to Ranchi an incident took place where a man was injured with extensive damage to his legs. Nobody would help the injured man, so Mr Lal offered to pay for him to go to the hospital. He was warned by an Army officer also a traveller on the train, that if he wanted proper treatment for this injured man he better take him to hospital himself. He was concerned that the money given would be stolen. This incident had a huge impact on Mr Lal, further spurring him on to do something, to make a difference. 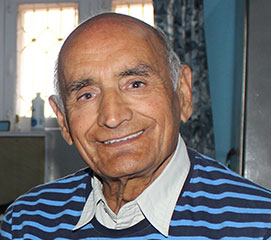 His visit to the leprosy colony in Ranchi encouraged him to build homes and provide a clean water supply for them. He contacted other NGO’s in the area to see if they could help; he found they were stretched and their resources limited. However, they helped as much as the could. These organisations worked in collaboration with Mr Lal to sponsor medical camps. They also provided medical treatment and food aid to a village where a significate number of the occupants were suffering from TB.

In 1985, Mr Lal had undergone an eye operation – a cornea graft which helped to restore his eye sight. Realising the benefits of such an operation, he sponsored eye camps with money donated by his friends and relatives. The camps were useful but provided no after care for patients to enable effective recovery. On his return to the UK, the Divine Onkar Mission charity was formally established and registered by Mr Manohar Singh with the Charity Commission in 1991. This provided DOM with the mandate to raise funds from the general public and businesses across the UK.

With donations raised by DOM members, an eye hospital where pre-care and after care was provided was established. This was built on land donated by a local business man in Ramghar, who was touched by Mr Lal’s determination to help the poor.

The slogan ‘Your old is my gold’ was born offering to take unwanted things, emptying garages, any donation were welcome. Stock was initially stored in Charanjit and Manohar Singh’s houses. As DOM became more active, news about our work became more widespread and we were inundated with stock so had to find a bigger storage space. Bank’s brewery got to hear about the good work and offered the home for storage for low rent. Unfortunately, shortly afterwards the house was sold. We then moved into a rented shop on Dudley Road, Blakenhall owned by the Wolverhampton City Council.

Soon DOM had developed a base of loyal customers. Our charity shop was operational and doing well. Another move was again necessary, to a rented premise, which was a warehouse on Lower Villiers Street, Blakenhall.

In 2001 we opened our offices at 66-67 Dudley Road. The opening ceremony was performed by a famous Hindi and Punjabi film actor, Dara Singh, also known for his world standard champion wrestling. DOM’s success was phenomenal and we extended our charity operations to building water wells, education for the children from the leprosy colonies, Langar (food aid) and Orphanages in India. In the Head Office in Wolverhampton, we began to provide free legal advice and counselling services for the local community. Slowly but surely, more and more people who had the necessary expertise, became involved helping to promote the work of DOM.

The current Head Office and charity warehouse was purchased in 2004, extensive renovation was required before we could move our full operations into one single location in Drayton Street. In 2011, The process of consolidation was achieved, bring both the fundraising and administrative Head Office under one roof.